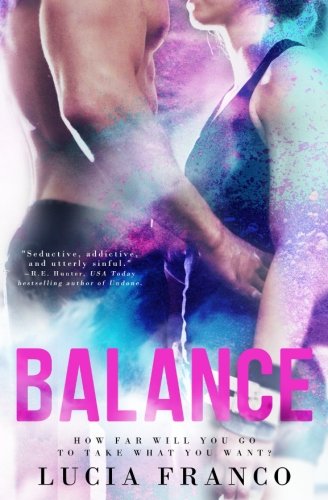 Adrianna Rossi is a 16 years old gymnast and she’s pushed herself hard all her life to make her olimpic dream come true.

The World Cup Academy of Gymnastics is the biggest chance she has to achieve her goals.

Konstantin Kournakova aka “Kova” is a 32 years old two-time Olympian, a successful business owner, one of the best Gymnastic Coaches there is and he isn’t exactly happy with the new athlete joining his program.

It’ll take a lot of work to make her a better gymnast and the way he’s attracted to her… makes things even more difficult.

This is my first Lucia Franco’s book and it will probably not be the last because I enjoyed her writing.
Unfortunately I had BIG issues with it.

My main problem with the MC wasn’t the age gap and Adrianna being only 16 even if, legally, IT IS RAPE.

I had trouble with their relationship because I didn’t feel a strong connection between Adrianna and Kova and, since Arianna is underage…that’s even a bigger deal to me.
I actually truly despised Kova for giving in to the lust he feels for her.

He’s supposed to be her mentor and lust isn’t a good enough reason to seduce his 16 years old gymnast!!
Well, nothing is.

He treats Adrianna like a “good fuck” he isn’t able to resist while he keeps on fucking and cheating on his girlfriend Katija.
THERE ARE NO EXCUSES FOR HIS ACTIONS.

He doesn’t care for Arianna’s wellbeing in the slightest.
He doesn’t even think about proper contraception FOR GOD’S SAKE!!

“I will tell you right now that if you get pregnant and it somehow comes back to me, I will deny it until the day I die,”

Kova’s actions made the second half of this book cringe worthy.
That quote right there shows the piece of shit he truly is!

I hoped for some kind of redemption but it actually gets worse in the last pages where he uses her again, acting in the worst way possible out of petty jealousy.
I completely agree with this GR review:
https://www.goodreads.com/review/show…

As I said in the beginning, I actually enjoyed the writing when I wasn’t cringing about what was going on between the MC.
Arianna’s training as a gymnast is realistic and very well narrated.
It clearly shows the author knows what she’s writing about.

I can’t, in good conscience, give this book a rating that’s not the lowest though.
Thinking about this plot and characters just makes me upset.

* Balance by Lucia Franco is book 1 in the Off Balance series and ends in a CLIFFHANGER.

❤❤ Are you looking for a specific mix of ingredients for your next read?