A Good Rogue Is Hard to Find by Kelly Bowen 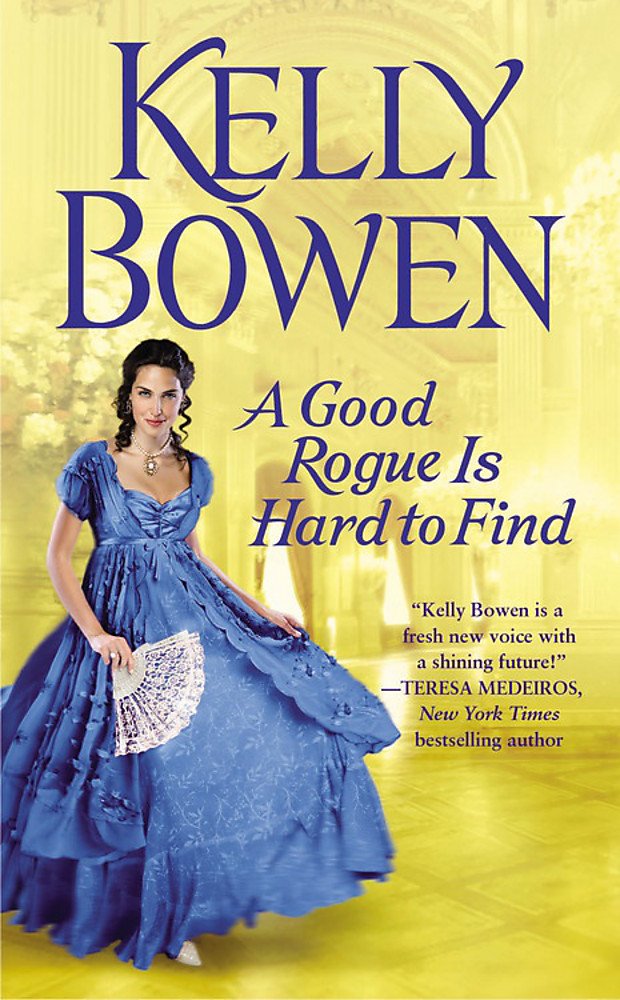 William Somerhall, Duke of Worth has a problem: his mother’s eccentricities.
Chickens everywhere, a python as a pet and who knows what else will taint the reputation and credibility of his dukedom!

“Mother,” Will started, “your chickens just chased your dinner guests out of your house and down the drive.”
“Oh, that wasn’t the chickens, darling. That was Phillip.” She stepped back and gestured at the goddess with the snake, and Will was finally forced to face both.
He was relatively pleased that he managed to hold his ground, even as the serpent extended itself toward him, probing the air with its flicking tongue. He wrenched his gaze away from the unholy creature and focused instead on the woman, meeting a pair of enigmatic ice-blue eyes, nearly level with his own.

Unfortunately his mother’s beautiful companion, that he hoped would help him fix the situation, seems up to something he can’t quite figure out.

“No one is going to be hanged.”
“So just transported then.”
“No one is going to be transported anywhere,” said Eleanor with an exasperated sigh.
“Have you forgotten what it is I do?” Jenna kicked the edge of the rug in frustration.
The duchess’s nostrils flared. “Dramatics do not suit you, Miss Hughes.”
“I am not being dramatic, I am being pragmatic. Every successful thief is pragmatic.”
“You are not a thief. You use a unique set of skills to recover. Recoup. Retrieve.”
“I steal.”
The duchess made a derisive sound. “No more than anyone else.”
“Except when the ton does it, it’s not called stealing. When an earl or a viscount or a marquess steals the rightfully earned income of his tailor or cobbler, it’s called entitlement.”
“That may be so, Miss Hughes, but nothing has changed from yesterday. There has always been risk.”
“Yes, but now there is a duke. And a damned principled one at that.”

There’s too much at stake, too many lives involved and they cannot fail them.

The Duke must be distracted at all cost and, to do so, Jenna is ready to outsmart him at every turn and keep him away from the truth of their “business”.

What isn’t she ready for?
Falling for him!

Interesting characters, good plot and most importantly, well executed.
The writing is humorous and engaging…

“I was thinking that dress is the singularly most ugly piece of clothing I have ever seen.” He congratulated himself on his recovery.
“Good heavens. Your charm is overwhelming.”
He smiled despite himself. “I don’t need charm, Miss Hughes. I have a fortune and a title.”
“True enough. And you’re handsome.”
He gasped like a little girl, a humiliating sound he quickly tried to hide behind a fit of coughing. Had she just called him handsome?

… I had a smile on my face reading every single page!

I truly found all characters charming, the MC, the Duchess Eleanor, the “servants” especially the 3 brothers (Paul, Joseph and Luke) helping out with “the plan”:

“Tell me, Luke, when the Duke of Worth demands to know how it is you became Her Grace’s butler, what will you tell him?”
Luke looked at her thoughtfully. “Why, the truth, of course.”
“Which is?”
“That I’m good at opening doors.”
Jenna snorted. “Just doors?”
“And windows and latches and all manner of locks, but I see no need to boast. Humility better suits a butler, don’t you think?” He gave her a languid smile.
“Indeed.”

Let’s say Luke, like his brothers, has a remarkable skill set! 😜

I loved all interaction between main and secondary characters and the MC’s banter/conversations:

“Marriage is not something you desire?”
“I am no longer foolish,” she answered ruefully, her mouth curling and her dimple creasing. “So no, I do not desire marriage. The furtherance of my bloodline is not vital for the continuation of the world as we know it. You, sadly, are not so fortunate.”

Will is fascinated with Jenna at first sight and his mother knows exactly why:

The duchess smiled faintly. “My son has scores of women vying for his attentions, either for his money, his title, or bragging rights. But you, Miss Hughes, are an enigma, if only for your clear disregard for all three. Like any man, he’ll want to determine why.”
“That’s not true. I quite like the idea of his money.”
“But not for yourself.”
“That’s not the point.”
“That’s exactly the point, dear.”

Jenna is intrigued by him too.
His principles and his honesty make him very different from other men, especially peers, she’s met in her life.

She has a troubled past and, because of it, she’s determined to help tradesmen and -women unable to collect what is owed to them from members of the ton. Jenna and Elinor are the only hope to save their worthy business from failing.

Jenna and Will share a passion for horses and horse racing  is at the center of Jenna & Elinor’s plan.

Both women fear that Will, due to his strict ethics, wouldn’t understand the reasons behind their actions.

I truly enjoyed how the story unfolded and how Will’s character developed.
He is absolutely adorable and dreamy, for once a hero worthy of such “title”!
He’s compassionate and sweet instead of entitled and every occasion for drama between MC is quickly cleared in a way that’s believable and mature.

They are so good together!😍

“You can tell a great deal about a man from his hands,” she said, considering his. “And yours are exquisite. They are your best feature.”
Will wrapped his fingers around hers, a small smile playing around his mouth. “I’m not sure if I should be flattered or insulted. Though I must confess, no one else has ever commented on my hands. What do they tell you?”
“Your hands speak of a man who isn’t afraid to do for himself, even though he has others who could.” She traced the nicks and scars over the tanned skin. “They’re strong but not cruel. Gentle when they need to be. Capable. Sure.”
Will was watching her intently, his eyes dark, all humor gone.
Jenna brushed the sparse hair over the backs of his knuckles and touched the blunt, callused ends of his fingers. “I’ve heard it said that the eyes are the window to the soul, but I disagree. Beauty is as beauty does, not as it appears.” She threaded her fingers through his.

Oh well… I know the characters from this book will show up in the other books of this series and I can’t wait to read them all!!

⭐ 4.5 Stars rounded up ⭐
* A Good Rogue Is Hard to Find is book 2 in The Lords of Worth Series by Kelly Bowen. Can be read a STANDALONE.

Triggers: Heroine has a difficult past, she was left by her fiancé and lost their child afterward. Heroine doesn’t belong to the ton and a minor secondary character dies.

❤❤ Are you looking for a specific mix of ingredients for your next read?